On 11 August 2021, Daniele Amati, former Director of SISSA, turned 90. Professor Amati was born in Rome in 1931 but grew up in Argentina, where he started studying physics. He had the privilege to learn quantum mechanics by Richard Feynman, to meet Enrico Fermi at the prestigious Les Houches School in 1954, to hold a seminar in front of Lev Landau in Moscow. Following some important and early contributions to nuclear physics, he arrived at CERN in Geneva. In 1959, a scholarship opened the doors of the Organization’s Theoretical Division for him, which he also directed for three years. Almost thirty years later he moved to SISSA to lead it.

Most of SISSA we know today is largely due to his innovative ideas and actions that he realized during the 15 years of his term as Director, starting from 1986:  the neuroscience Area, a pioneering SISSA open-access electronic review and the Master’s course in Science Communication were created under his mandate.

On the occasion of his birthday, SISSA decided to celebrate this significant figure in the evolution of the School and in the physics of the 20th century: Professor Amati was invited to write a short autobiography and some of his friends and colleagues has been reached to collect memories of their life and work experiences with him.

The result is “Daniele Amati: memorie di incontri e di scienza”, a digital collection of contributions to wish him a happy birthday.

the biography (in Italian with English contributions) can be downloaded here 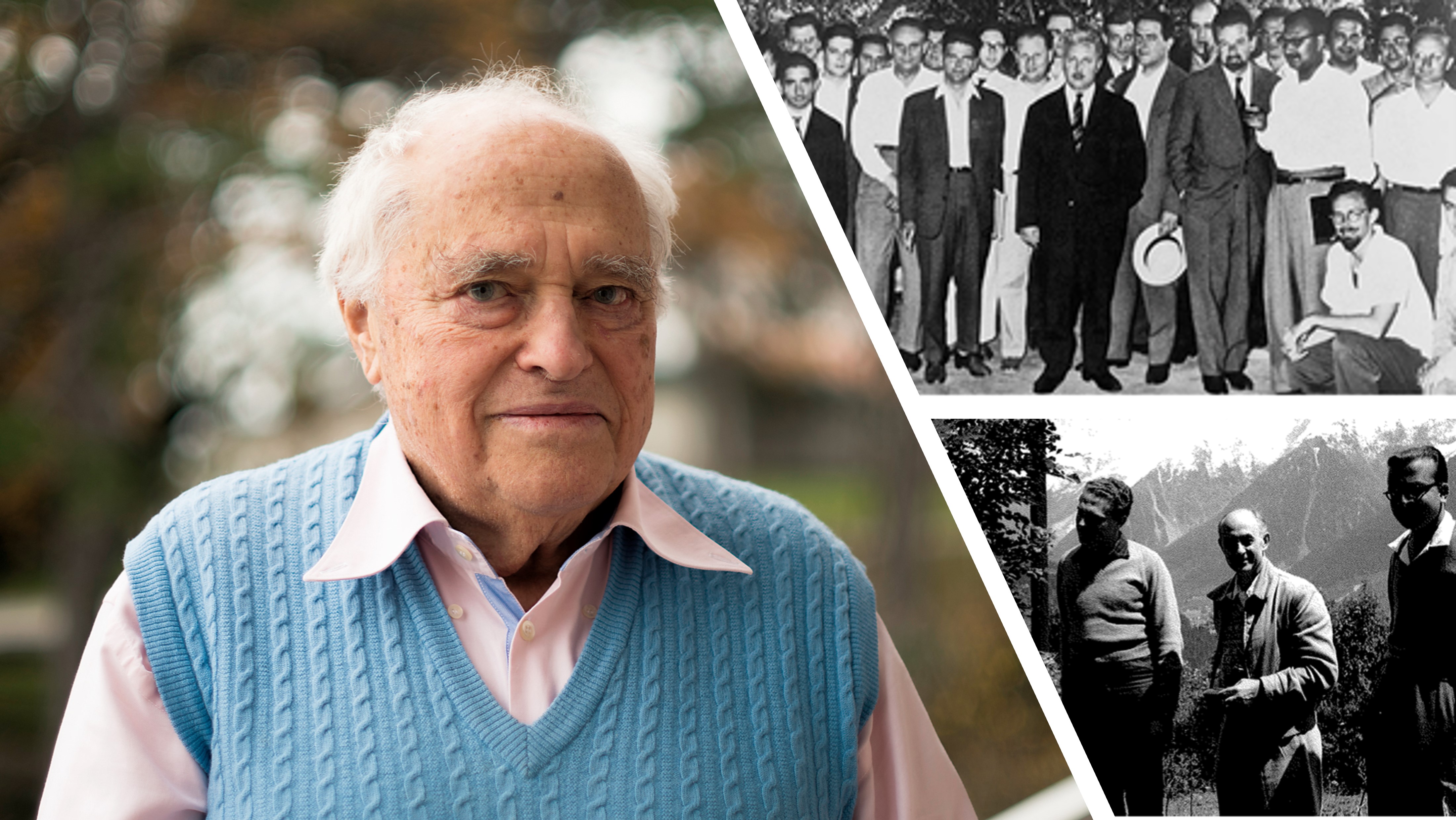 In 2018, SISSA turned 40. Founded on 6 March 1978, by virtue of Presidential Decree no. 102/1978, from the outset it was defined as a special scientific institute having legal personality and administrative, teaching and disciplinary autonomy (art. 19). Set up with the purpose of preparing graduates of physics and mathematical disciplines for advanced research, over the years it has experienced a significant rise in the number of students and an expansion into other areas of knowledge; this is the case with Neurosciences, the Interdisciplinary Laboratory of Natural and Human Sciences, the Masters and scientific publishing by the in-house company SISSA Medialab.

The motto “Ma per seguire virtute e canoscenza”, taken from canto 26 of Dante’s Inferno, and Ulysses on the ship, the symbol of the school, fully reflect the desire for knowledge, like the ambitions of its founder Paolo Budinich. It was very important to Budinich, a scientist and expert sailor, that the school be situated in the capital of Friuli Venezia Giulia, frontier city between East and West, meeting point of languages, ethnic groups and religions. Its geographical position is also the reason why SISSA immediately took on a marked international connotation and developed a strong collaboration with the International Centre for Theoretical Physics (ITCP), of which Budinich was also cofounder with the Nobel Prize winner Abdus Salam. “(…) To this end, the School promotes appropriate forms of connection between national and international advanced research institutes, the University of Trieste and the Region. The School may extend its activities to other cultural sectors.” (art. 20)

The key mission of SISSA was to provide an excellent preparation for new graduates who wanted to approach the world of research and academic teaching. The School was the first in Italy to confer the title of Philosophiae Doctor (PhD), given the same status as research doctorate in 1987, which had been initiated by other Universities in the meantime. Since 1978, more than 1300 students from all over the world have been conferred with the title of PhD. There are about 80 faculty, more than 100 Post-Doc and more than 100 administrative employees. Since 2007, it has received 22 ERC (European Research Council) grants, namely 20% of its members have received these prestigious grants.

Over time, the study and teaching activities have also increased: in the Physics area, the groups of Statistical Physics, Astroparticle Physics, and Physics and Chemistry of Biological Systems have joined the initial well-established groups of Elementary Particles, Condensed Matter and Astrophysics; in the Mathematical Area, the initial groups of Functional Analysis, Mathematical Physics and Geometry have been joined by a new Applied Mathematics group; while in the Neurosciences area, three research groups have been set up, namely Genomics, Neurobiology, and Cognitive Neurosciences.

SISSA has also considerably increased its collaborations with other important international institutions as well as strengthened its connections with other institutions of the Friuli Venezia Giulia Region in the development of significant research projects in the High Performance Computing sector.

The changes have been so significant that in 2010, under the management of Stefano Fantoni, SISSA identified a 100000 m² campus to house its studies and research activities: a former hospital for treating tuberculosis, it faces completely onto the city gulf. In addition to the main building, it includes SISSA Medialab, a gym, and “La SISSA dei piccoli” nursery.

At the milestone of its first 40 anni, the School has set itself new goals for the future: from Data Science to Cognitive Sciences; from recent discoveries on gravitational waves to quantum entanglement; from calculus of variations to applied mathematics. Despite the growth and the changes, one thing has never changed over the years: the way research is conducted. The groups work independently to reach their goals, with specific and advanced study and experimentation techniques, without losing sight of the collaboration and dialogue with other national and international research institutes.

A series of events and shows have been held to mark the fortieth year of activity. From Colloquia, an important moment of international exchange on interdisciplinary themes, to true celebratory events. These include, “Women in science”  on 9 May, a platform for dialogue on the presence of women in research, which discussed the more appropriate strategies to promote the role of women in science networks; through workshops and conferences "Sissa in Festa" allowed the city to become acquainted with the research activity of the School on the sense of taste; the Opening Ceremony on 5 November, where, in the presence of the writer Paolo Giordano and the scientist Gian Francesco Giudice, former SISSA student, the new academic year was inaugurated and the Alumni Association set up, to bring together current and former SISSA students. 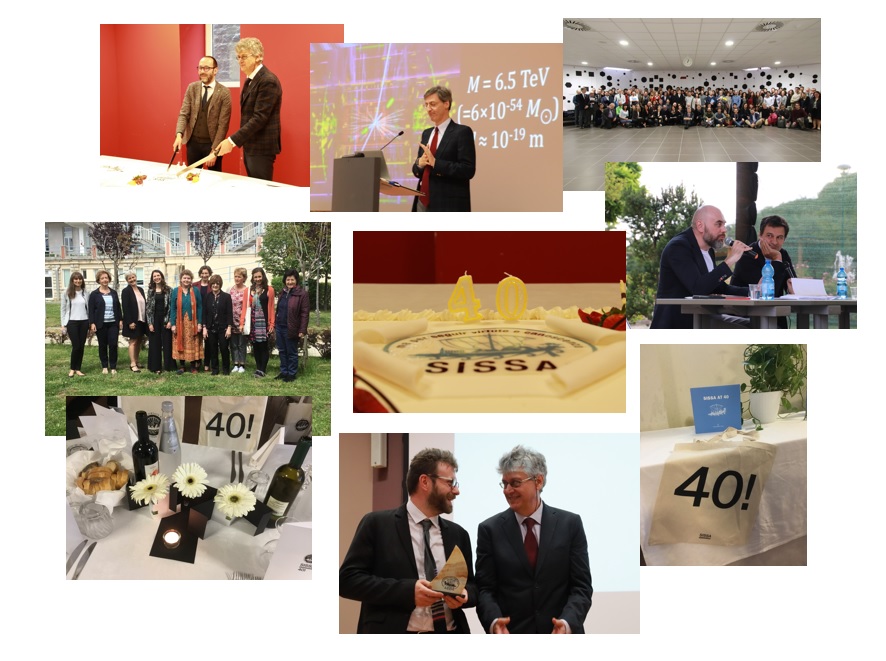 SISSA is all this and more, so much so that any attempt at a historical description could never be complete. This is why we have chosen to enshrine its milestones into an editorial product, so that anyone who comes across the School during their studies and research can acquire a basic knowledge of it. At this link, you can download the full pdf of the text “SISSA at 40”, by Giuseppe Mussardo and Silvia D’Autilia, with the scientific supervision of the Director Stefano Ruffo.